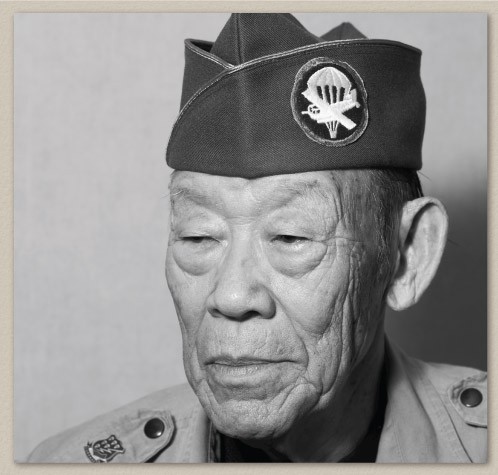 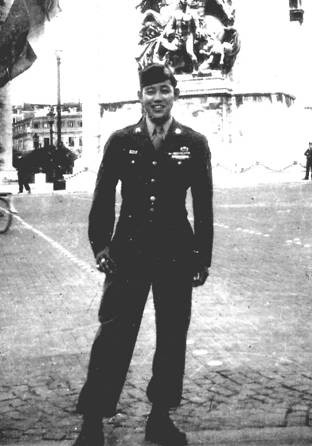 The face of Bob Izumi, eighty-seven, is well known during commemoration events in Belgium for the Battle of the Bulge.
Born in California, one of his high school classmates was Norma Jean Baker (a.k.a. Marilyn Monroe).
He was among the 120,000 ethnic Japanese and their families placed in internment camps after Pearl Harbor, but he left the camp to complete his education in Iowa.
After graduating, he volunteered to join the Army in June 1944, and his extraordinary career began.
Izumi signed on with the 442nd Regimental Combat Team, a Japanese-American unit, and then moved on to the 101st Airborne Division as a paratrooper.
The 101st was deeply involved in fighting the Germans in Belgium and Luxembourg during the bitter winter of the Battle of the Bulge.
Izumi helped liberate many people from concentration camps and, in May 1945, moved on to Berchtesgaden, Hitler's hideout in the Bavarian Alps.
While there, he says, "I was shocked to see this little girl in an abandoned house. She was holding a sheet of stamps with Hitler's head printed on them."

Bob joined the Army in WWII as a member of the Japanese-American  Nisei Battalion and saw action in Italy before he volunteered for  Paratrooper duty. He was trucked in to Bastogne with the 506th PIR and went on to make the Army a career, serving in Korea, Vietnam  and Panama.
In April 1972, Robert joined the Air Force at Edwards Air Force Base, California. He continued  to serve within the Air Force as a CM sergeant until his final discharge in  December 1975.

He shared school classes with Marilyn Monroe, endured the harsh living conditions of an interment camp, lived through three wars, communicated with astronauts Neil Armstrong and Robert White, then spent the next 27 years managing one of the Marine Corps Community Services’ hobby shops.
Robert Izumi, Wood/Rock Hobby Shop manager, will close this chapter of his life after nearly 60 years of combined federal service as he retires from a very storied career today.
Considered somewhat of an icon aboard MCLB Barstow, he has been recognized in recent years as the oldest civilian Marine, on the Nebo side of the base, at cake cutting ceremonies during Marine Corps Birthday observances.
While sitting down and speaking with Izumi one would soon find out that his career with the federal government, both military and civil service, and his life experiences in general could make an ideal segment for the History Channel.

He was born in Southern California Sept. 18, 1924, one of five sons, and attended school in Beverly Hills. One of his classmates at that time was future actress Marilyn Monroe.
“I sat next to her in homeroom and English class. She was kind of a homely girl, not very pretty. But she started blossoming out in about the 11th grade,” he said jokingly.
However, his friendships with his classmates were soon cut short. Following the attack on Pearl Harbor, President Franklin D. Roosevelt issued Executive Order 9066, which permitted the military to circumvent the constitutional safeguards of American citizens in the name of national defense.
The order set into motion the exclusion from certain areas, and the evacuation and mass incarceration of 120,000 persons of Japanese ancestry living on the West Coast, most of whom were U. S. citizens or legal permanent resident aliens, according to www.children-of-the-camps.org Web site.

For the next two years Izumi spent his days at the Manzanar interment camp, one of ten located in California, until he was “rescued” by a school teacher from Iowa.
“She came in asking if anyone wanted to volunteer to go to Iowa to finish their education,” Izumi said. “A lot of guys didn’t want to go but I volunteered to go.”
He finished his education and later volunteered to join the U. S. Army in June 1944.
“The military was still segregated at that time so I had to join the 442nd, an all Japanese unit” he revealed.
The 442nd Regimental Combat Team’s motto during World War II was “Go for Broke,” in gambling terms it means risking everything to win big, and they had to win big. It was one of the most decorated units, for its size and length of service in military history, according to the Go for Broke Educational Foundation.
But for as much action as the unit saw, Izumi was only attached to the unit until September 1944 when he transferred to the 101st Airborne Division.
“I wanted to be a pilot but it wasn’t allowed. The closest I could get to flying was jumping so I became a member of G Company, 506th PIR (Parachute Infantry Regiment),” he said.
While with the 506th Izumi’s unit made jumps into Italy, France and worked its way to Berchesgaden, Austria, in the Bavarian Alps, the location of Hitler’s Hideout.
“We went into Hitler’s hideout, which wasn’t much by the time we arrived, and down to Zell am Zee to liberate some prisoners there, and then on to Uttendorf,” Izumi explained. “We went into the Alps to look for prisoners and liberated quite a few. After that we had to get out of the Alps because winter was coming in so we went into Joigny, France, after that. Our division made its last jump in Joigny.”
At Uttendorf the 506th, which included not only G Company but also Easy Company, the unit in which the television series and novel “Band of Brothers” is based on, established its command post. The regiment remained there until November 1945 when it was deactivated and its few remaining members where assigned to other units.
Izumi remained with his unit in the European Theater until just after Gen. George Patton was killed in an auto accident; the outfit departed Frankfurt, Germany, in 1945 and returned to the United States.
Before he left Europe, Izumi said he got to meet Gen. Dwight D. Eisenhower and other top generals and emphasized that they were wonderful people. He even stood special guard for the eventual president of the United States as well as Patton and Gen. Joseph T. McNarney who was commander of the Mediterranean Theater of Operations, USA and deputy Supreme Allied Commander, Mediterranean at the time.

Upon his return to the states Izumi transferred into the Army Air Corps in 1945 and in 1947 as a staff sergeant he decided to join the Air Force just after its establishment in 1947.
His first Air Force assignment, as a communications specialist, took him to Kunsan Air Force Base Korea during the Korean War.
“(In Korea) we built the Shinguan Orphanage outside of Kunsan,” he said. “We would go into the mountains and find unwanted kids, that their mothers would have from the GIs and then wouldn’t take advantage of the local hospital. We would find out where the babies were and take them back to the orphanage.”
For his efforts he received a Humanitarian Certificate from the president of South Korea.


Izumi found himself in Turkey for his next assignment and was there when Francis Powers, a Korean War veteran who worked for the Central Intelligence Agency, was shot down over the USSR while piloting a U-2 spy plane in 1960.


During the Vietnam War, in which Izumi said he did “one too many” tours from 1966 - 1967, he helped save a downed American pilot and for his efforts received the South Vietnamese Armed Forces Honor Medal and a Bronze Star. This came as a result of coordinating with the village chiefs to get approval to cross their land to get the pilot. After getting the ok from the different chiefs he scrambled a helicopter to go in and retrieve the pilot.
“They came down from Saigon and gave me the Medal of Honor, I don’t know what for,” he mused. “ It was just our duty there; other guys did more than I did. Besides, other people picked him up I didn’t.”

After serving in Vietnam Izumi returned to the states and was assigned to Edwards Air Force Base, Calif., and worked with the astronaut program from 1967 to 1969.
“In 1969 I went back to Okinawa and helped the Japanese government take over after that,” he said. “Then I returned to the states to Travis Air Force Base and remained there until I retired from active service in 1975 as a chief master sergeant.”

Izumi revealed that he had five brothers, all of whom served in the Army and fought in World War II.
“My oldest brother served in Vietnam the same as I did,” he said. “He did three tours. He’s passed away now along with my youngest brother.”

During his last three years before retiring from the Air Force at Travis, Izumi worked for then what was called Special Services. When a billet for a hobby shop manager opened at MCLB Barstow he applied for and got the position and has been here since. Why Barstow?
“It was the only position opened at the time and I took it,” he said, “and I have no regrets about my decision to come here. It’s been great, and I’ve met some wonderful people. It’s been great working with the Marines too.”

Izumi concluded by happily announcing that upon his retirement from federal service, he will have left the Wood Hobby Shop with 8,517 days without an accident.