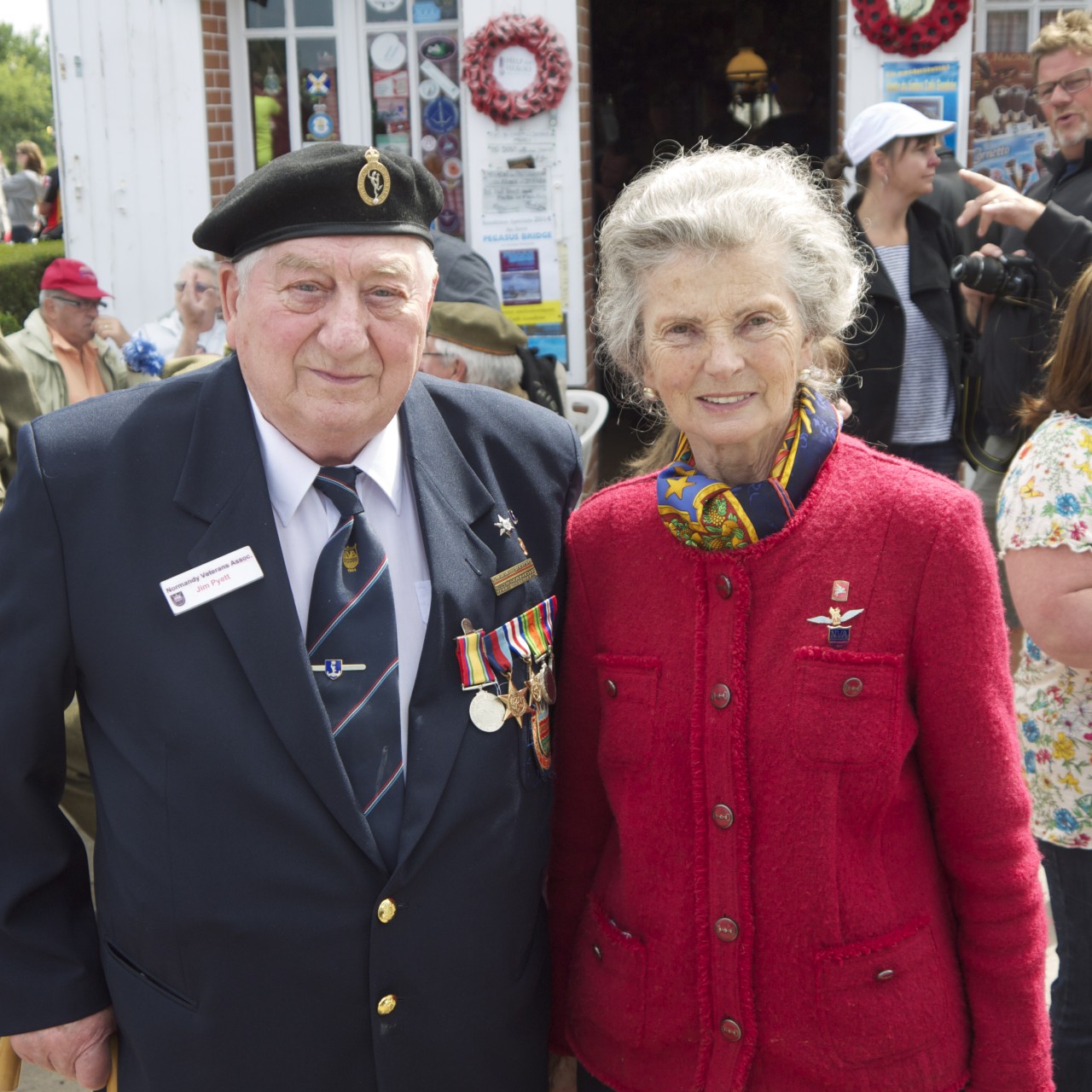 Jim Pyett with Madame Gondrée, the daughter of the owner of the famous Café Gondrée at the Pegasus Bridge.

"After we moved up from Normandy we did not stop until we reached Belgium.My unit was an Air formation signals unit,the 17th.

We by-passed Brussels and followed the Canadians along the coast eventually reaching Ghent.We were attached to 85group of the 2nd Taf(Tactical Air Force) and we took over the airfield south of Ghent and our HQ was a chateau nearby.As a driver I operated in a large triangle from Antwerp to Ostend and Brussels.As you can guess I was kept very busy during this period and my elder brother was in the Ordnance Corps in Antwerp and he was working in the docks along the Boom Strasse.I attempted to locate him but as you know Antwerp was under constant air bombardment and usually the officers I took there where always in a hurry to depart.

In 1940 when the Blitz on London began I was living in London's East End in Poplar and my brothers factory was in Millwall and was destroyed on that first Saturday. I on the other hand worked along the Mile end road for a box making company but finally in October this was also burnt to the ground by incendiary bombs. Then we were bombed out and left London and went to Bournemouth where I found work and we were rehoused.

But then early in 1941 the Germans began bombing Bournemouth and one night when I was on fire watching duty. I was blown by a bomb into a clump of bushes and when the ARP pulled me out I found a twig embedded in my arm like an arrow and a large gash on my hand. I was taken to hospital where my wounds were treated and when I arrived back home my father told us that if we were being bombed in Bournemouth we might as well go back to London. His old company offered him his job back to him as an electrician an he and my brother Sid went back to London and a few days later we had a telegram that he had been given a flat near Clapham Common and so we left Bournemouth on Saturday morning and arrived in London by midday and we were met by my father and brother and taken to Clapham to view our new home. But as usual that evening the air raid sirens sounded and my mother and little brothers and sisters(there were 7 of us) Went to the shelter and my brother and I decided to clear up a bit while our father had a shave. Then suddenly there was a great crash and the whole flat was plunged into darkness and I heard my brother calling and I answered and then we heard our fathers voice and we staggered out through all the dust and debris until we reached the landing were the ARP helped us down  the stairs.

All the families were given temporary accomodation in  a school  and a few days later the London, County Council rehoused us just outside London in Morden in Surrey.

In 1942 my brother was conscripted into the army and in November when I reached 18 years of age I also was conscripted. My brother and I felt we had a lot of paying back to give to the Nazi's.

When operation Market garden began I had to take a Captain in my Jeep to Holland and we found a line group in a field not far from a place which I think was called TurnHout (excuse my spelling). We followed up the main body and then my Captain decided that he should return to Ghent to make his report. By that time the shelling was getting heavy and so we returned. I then stayed in Ghent doing my usual runs to Antwerp and Brussels and then on New Years day 1945 I was duty driver and I was by our office in the Chateau when about 30 enemy planes came over our field bombing and straffing us' We were taken completely by surprise and the airfield was heavily bombed and we suffered many casualties. The reports we got via the RAF was that most of the enemy planes were shot down before they reached back to Germany.

I was sent back to Holland and stayed there until just before the Rhine crossing when I was shipped back to England where I was given 7 days leave and put on a draft to Burma where I finally finished the war.

When I was finally demobbed in 1947 (Demob was a very slow business) I just wanted to get back to being a civilian once more but I joined the Normandy vets because I needed to relate to people who like myself had suffered the trauma of  war.........."